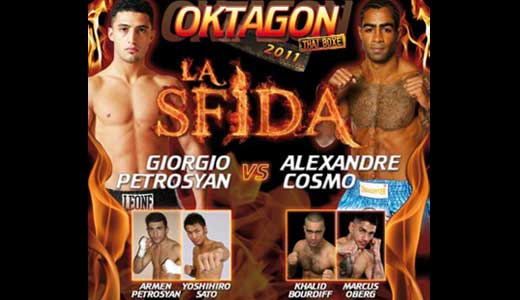 Finally everything is ready for the big event of k-1 and muay thai Oktagon 2011, scheduled for Saturday, March 12 in Milan (Italy), where the main fight will be Giorgio Petrosyan vs Alexandre Cosmo, another tough fighter for Petrosyan after the fight versus Sudsakorn Sor Klinmee. In the last days has also been confirmed the presence of Sudsakorn Sor Klinmee that, eliminated by the organizers of the Isuzu Cup (for his fight at Thai Boxe Mania), will face Xu Yan (from China). Instead Fabio Pinca is no longer in the fight card, which will be replaced by Angelo Campoli in the fight against Andrei Kulebin. But in the same evening we will see also two other world-class fights: Yoshihiro Sato vs Armen Petrosyan and Dzhabar Askerov vs Chris van Venrooij!