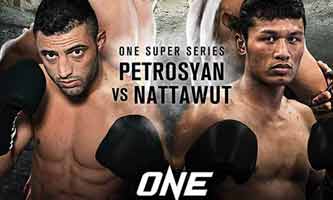 Review by AllTheBestFights.com: 2018-04-20, fight not so exciting between Giorgio Petrosyan and Jo Nattawut: it gets two stars.

The former Glory and K-1 World Max champion Giorgio Petrosyan entered this fight with a professional kickboxing record of 86-2-2 (38 knockouts) and he is ranked as the No.4 super welterweight in the world. ‘The Doctor’ Petrosyan suffered his second defeat of his career during the semifinal of the Glory lightweight tournament against Andy Ristie in 2013 (Petrosyan vs Andy Ristie), since then he has won ten bouts beating Artem Pashporin (Petrosyan vs Pashporin), Amansio Paraschiv (Petrosyan vs Paraschiv) and Crhis Ngimbi in 2017 (Giorgio Petrosyan vs Chris Ngimbi 2).
His opponent, the former WMC and Lion super welterweight champion Jo Nattawut, has an official record of 60-11-2 and he suffered his last loss in 2016 when he faced Regian Earsel; after this bout he has won four fights beating Kengsiam Nor Sripueng and Petchtanong Banchamek in 2017. Petrosyan vs Nattawut is on the undercard of Kevin Belingon vs Andrew Leone – ONE FC 71. Watch the video and rate this fight!

Event: ONE Championship 71: Heroes of Honor