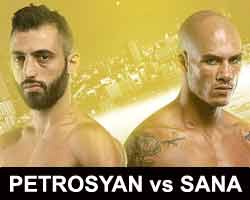 Review by AllTheBestFights.com: 2019-10-13, pretty good fight between Giorgio Petrosyan and Samy Sana: it gets three stars.

The former Glory, K-1 World Max, Bellator and current ISKA kickboxing champion Giorgio Petrosyan entered this fight with a professional kickboxing record of 101-2-2 (41 knockouts) and he is ranked as the No.3 super welterweight in the world. ‘the Doctor’ Petrosyan has already fought four times in 2019 beating Atsushi Tamefusa (Giorgio Petrosyan vs Atsushi Tamefusa) and facing twice Phetmorakot Petchyindee Academy: Giorgio has lost the first bout (but then was overturned in a no-contest due to illegal clinching by the Thai fighter, Giorgio Petrosyan vs Petchmorakot Petchyindee I) and has won the second one (Giorgio Petrosyan vs Petchmorakot Petchyindee 2); after this bout he has defeated Jo Nattawut (Giorgio Petrosyan vs Jo Nattawut 2).
His opponent, the former Wbc and Iska world champion Samy Sana, has an official record of 135-9-1 (49 knockouts) and he entered as the No.6 middleweight. He fought three times in 2019 losing to Jo Nattawut in February but then he has beat Yodsanklai Fairtex in May (Yodsanklai Fairtex vs Samy Sana 2) and Dzhabar Askerov in August (Samy Sana vs Dzhabar Askerov). Petrosyan vs Sana is the final of the Kickboxing featherweight World Grand-Prix tournament; undercard of Aung La N Sang vs Brandon Vera – ONE Century (One 100). Watch the video and rate this fight!

Video documentary before the final