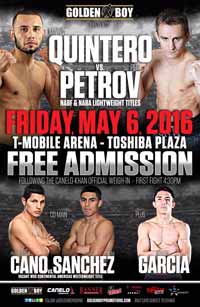 Review by AllTheBestFights.com: 2016-05-06, nice and tough exchanges between Marvin Quintero and Petr Petrov: it gets three stars.

Marvin Quintero entered this fight with a pro boxing record of 28-6-0 (24 KOs=86%) and he is ranked as the No.59 lightweight in the world. He fought three times last year losing to Jose A Gonzalez but then he won over Cesar De la Mora and Jeffrey Fontanez.
His opponent, Petr Petrov, has a record of 36-4-2 (17 knockouts) but he is not ranked as he hasn’t fought since April 3, 2015 when he defeated Gamaliel Diaz (=Petrov vs Diaz). Quintero vs Petrov is valid for the NABF and WBA-NABA lightweight titles. Watch the video and rate this fight!