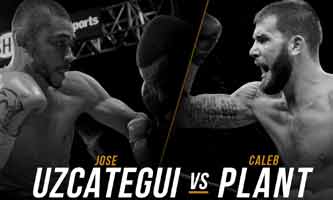 Review by AllTheBestFights.com: 2019-01-13, some good rounds but it is not enough to get three stars: Jose Uzcategui vs Caleb Plant gets two.

The Ibf super-Mw champion Jose Uzcategui entered this fight with a professional boxing record of 28-2-0 (23 KOs=82%) and he is ranked as the No.8 super middleweight in the world (currently the #1 in this division is Callum Smith). Between 2017 and 2018 he faced twice Andre Dirrell losing the first bout (via disqualification since Jose hit the American after the bell but ‘Bolivita’ was ahead on points, Andre Dirrell vs Jose Uzcategui I) but then he has won the rematch (Andre Dirrell vs Jose Uzcategui II); after this bout he has also beat Ezequiel Osvaldo Maderna (Jose Uzcategui vs Ezequiel Osvaldo Maderna).
His opponent, the undefeated Caleb Plant, has a perfect record of 17-0-0 (10 knockouts) and he entered as the No.33 in the same weight class. In his last three fights he has won over Thomas Awimbono, Andrew Hernandez and Rogelio Medina. Uzcategui vs Plant is valid for the IBF World super middleweight title. Watch the video and rate this fight!