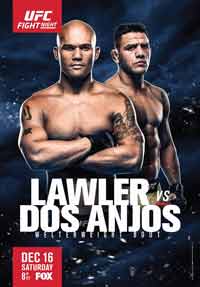 Review by AllTheBestFights.com: 2017-12-16, nice exchanges between Santiago Ponzinibbio and Mike Perry: it gets three stars.

The black belt in Bjj Santiago Ponzinibbio entered this fight with a pro record of 25-3-0 (80% finishing rate) and he is ranked as the No.14 welterweight in the world. He suffered his last defeat in 2015, against Lorenz Larkin (=Larkin vs Ponzinibbio), but then he has won five bouts beating Nordine Taleb (=Ponzinibbio vs Taleb) and Gunnar Nelson in 2017 (=Nelson vs Ponzinibbio).
His opponent, Mike Perry, has an official mma record of 11-1-0 (100% ko/tko victory rate – he has never won via submission) and he entered as the No.23 in the same weight class. He suffered his first loss last year when he faced Alan Jouban (=Perry vs Jouban) but then he has defeated Jake Ellenberger (=Ellenberger vs Perry) and Alex Reyes (=Perry vs Reyes). Ponzinibbio vs Perry is on the undercard of Robbie Lawler vs Rafael dos Anjos – UFC on Fox 26. Watch the video and rate this fight!

(Free embeddable video hosted on Youtube and not uploaded by AllTheBestFights)
https://www.youtube.com/watch?v=50HgqdjfeXQ