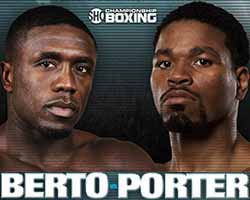 Review by AllTheBestFights.com: 2017-04-22, good fight between Andre Berto and Shawn Porter: it gets three stars.

The former Ibf Ww champion Shawn Porter entered this fight with a professional record of 26-2-1 (16 knockouts) and he is ranked as the No.5 welterweight in the world (currently the #1 in this division is Manny Pacquiao). He beat Adrien Broner in 2015 (=Broner vs Porter) but then he lost to Keith Thurman in 2016 (=Thurman vs Porter).
His opponent, the former Wbc, Ibf and Wba Ww champion Andre Berto, has a boxing record of 31-4-0 (24 KOs=77%) and he entered as the No.12 in the same weight class. He was defeated by Floyd Mayweather Jr in 2015 (=Mayweather vs Berto) but he came back to win in 2016 beating Victor Ortiz (=Berto vs Ortiz 2). Shawn Porter vs Andre Berto, WBC welterweight title eliminator, is the main event of the evening. Watch the video and rate this fight!