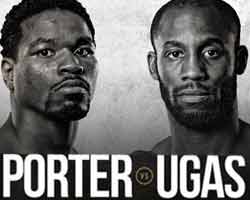 Review by AllTheBestFights.com: 2019-03-09, close and tough fight between Shawn Porter and Yordenis Ugas: it gets three stars.

The former Ibf and current Wbc Ww champion Shawn Porter entered this fight with a pro record of 29-2-1 (17 knockouts) and he is ranked as the No.3 welterweight in the world (currently the #1 in this division is Terence Crawford). He lost to Keith Thurman in 2016 (4-stars fight, Thurman vs Porter), but then he has won over Andre Berto (Porter vs Berto), Adrian Granados (Shawn Porter vs Adrian Granados) and Danny Garcia (Danny Garcia vs Shawn Porter).
His opponent, the former Olympian Yordenis Ugas, has an official boxing record of 23-3-0 (11 knockouts) and he entered as the No.9 in the same weight class. He suffered two consecutive losses in 2014, against Emmanuel Robles and Amir Imam, but since then he has won eight bouts defeating Ray Robinson (Yordenis Ugas vs Ray Robinson), Jonathan Batista and Cesar Miguel Barrionuevo in his last three (Yordenis Ugas vs Cesar Miguel Barrionuevo). Porter vs Ugas is valid for the WBC World welterweight title (Porter’s first defense). Watch the video and rate this fight!