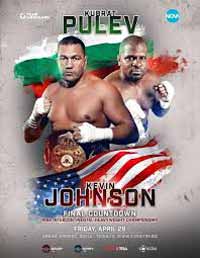 Review by AllTheBestFights.com: 2017-04-28, fight not particularly good between Kubrat Pulev and Kevin Johnson: it gets two stars.

Kubrat Pulev entered this fight with a professional boxing record of 24-1-0 (13 knockouts) and he is ranked as the No.4 heavyweight in the world (currently the #1 in this division is Anthony Joshua). He suffered his only loss when he faced Wladimir Klitschko in 2014 (=Klitschko vs Pulev) but then he has won four bouts beating Dereck Chisora (=Pulev vs Chisora) and Samuel Peter (=Pulev vs Peter).
His opponent, Kevin Johnson, has an official record of 30-7-1 (14 knockouts) but he won just two out of his last eight fights beating Solomon Haumono in 2013 and Jamal Woods in 2017. Before this bout he had lost to Anthony Joshua (=Joshua vs Johnson). Kubrat Pulev vs Kevin Johnson is valid for the WBA Inter-Continental heavyweight title. Watch the video and rate this fight!