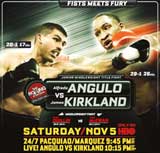 Review: 2011-11-05, boring fight between the undefeated Peter Quillin and Craig McEwan: one stars. “Kid Chocolate” Quillin defeated McEwan by TKO in the sixth round but the referee stopped the fight too soon (McEwan had never been knocked down during the fight). Peter Quillin (25-0-0) entered as the No.9 super middleweight in the world while Craig McEwan (19-1-0) entered as the No.39 middleweight. Quillin vs McEwan was on the undercard of Alfredo Angulo vs James Kirkland. Watch the video!