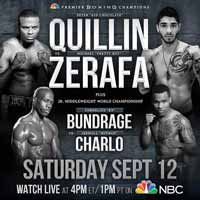 The former Wbo Mw champion Peter Quillin entered this fight with a professional boxing record of 31-0-1 (22 knockouts) and he is ranked as the No.3 middleweight in the world (currently the #1 in this division is Gennady Golovkin) but he comes off the draw against Andy Lee (=Lee vs Quillin).
His opponent, Michael Zerafa, has an official record of 17-1-0 (9 knockouts) and he entered as the No.88 in the same weight class. He suffered his only loss in 2014 when he faced Arif Magomedov, after this bout he has won twice beating Bruno Carvalho and Yodmongkol Singmanasak. Quillin vs Zerafa is the main event of the evening. Watch the video and rate this fight!