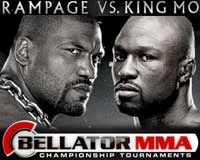 Review: 2014-05-17, pretty good second part of the fight but it is not enough to get three stars: Quinton Jackson vs Muhammed Lawal gets two. Quinton ‘Rampage’ Jackson entered this fight with a professional mma record of 34-11-0 (68% finishing rate) and he is ranked as the No.13 light heavyweight in the world, he was the Ufc light-Hw champion from May 2007 (defeating Chuck Liddell) to July 2008 (when he was beat by Forrest Griffin) but between 2011 and 2013 he lost three consecutive fights in the Ufc and he was released. Rampage made his Bellator debut in November 2013 beating Joey Beltran (=Jackson vs Beltran) and he won the Bellator light-hw semifinal in 2014 against Christian M’Pumbu (=Rampage vs M’Pumbu).
His opponent, Muhammed ‘King Mo’ Lawal, has an official record of 12-3-0 (75% ko/tko victory rate – he has never won via submission) and he entered as the No.15 in the same weight class (currently the #1 in this division is Jon Jones), he won the Strikeforce light-Hw title in 2010 defeating Gegard Mousasi but he lost the belt at his first defense against Rafael Cavalcante. Lawal suffered his last defeat in 2013 when he faced Emanuel Newton in their rematch (=Lawal vs Newton 2 – ‘King Mo’ had already lost the first bout Lawal vs Newton I) but he came back to victory in 2014 beating Mikhail Zayats (=Lawal vs Zayats). ‘Rampage’ Jackson vs Lawal is the final of the Bellator light heavyweight tournament, main event of Bellator 120; they also faced each other a second time on March 31, 2017 (=Quinton Rampage Jackson vs Muhammed King Mo Lawal 2). Watch the video and rate this fight!

Video:
Double click on the image to play the video (video hosted at this page on Facebook)