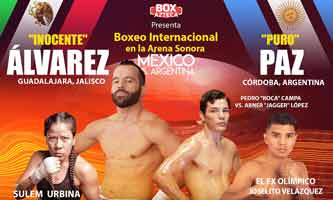 Review by AllTheBestFights.com: 2019-04-06, some tough exchanges between Ramon Alvarez and Jose Carlos Paz but it is not enough to get three stars: it gets two.

Ramon Alvarez (brother of Saul ‘Canelo’ Alvarez) entered this fight with a pro record of 27-7-3 (16 knockouts) and he is ranked as the No.36 super welterweight in the world but he comes off the loss against Brandon Rios (Brandon Rios vs Ramon Alvarez); before this bout, in 2018, he had won over Nicolas Luques Palacios and Jorge Paez Jr.
His opponent, Jose Carlos Paz, has an official boxing record of 23-8-1 (13 knockouts) and he entered as the No.55 in the same weight class. He fought four times last year losing twice, against Jaime Munguia (Jaime Munguia vs Jose Carlos Paz) and Anthony Fowler but between these two bouts he beat Omar Chavez and Jorge Paez Jr. Alvarez vs Paz is the main event of the evening. Watch the video and rate this fight!