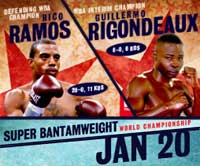 Review: 2012-01-20, great first round with one knockdown and nice knockout in the sixth but the other rounds were pretty boring: two stars. Both undefeated, Rico Ramos (20-0-0) entered as the No.3 super bantamweight in the world while Guillermo Rigondeaux (8-0-0) entered as the No.13. Ramos vs Rigondeaux is valid for the WBA super bantamweight title (Ramos’ first defense). Watch the video!