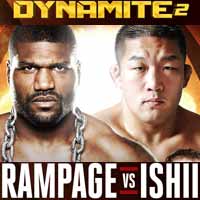 Review by AllTheBestFights.com: 2016-06-24, boring fight between Quinton Jackson and Satoshi Ishii: it gets one star.

The former Ufc light-Hw champion Quinton ‘Rampage’ Jackson entered this fight with a professional mma record of 36-11-0 (64% finishing rate) and he is ranked as the No.11 light heavyweight in the world. He suffered three consecutive defeats between 2011 and 2013 (the last one against Glover Teixeira: Rampage vs Teixeira) but then he has won four bouts winning the Bellator light-Hw tournament (Season 10) against Muhammed ‘King Mo’ Lawal (=Rampage vs Lawal) and beating Fabio Maldonado in his last fight (=Jackson vs Maldonado).
His opponent, the 2008 Olympic judo gold medalist Satoshi Ishii, has an official record of 14-5-1 (50 knockouts) and he entered as the No.59 heavyweight but he comes off the loss against Jiri Prochazka (=Ishii vs Prochazka). Rampage vs Ishii is the main event of “Bellator 157: Dynamite 2”. Watch the video and rate this fight!