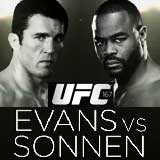 Review: 2013-11-16, fight not particularly exciting between Rashad Evans and Chael Sonnen: it gets two stars. Rashad Evans (18-3-1, 44% finishing rate) entered as the No.3 light heavyweight in the world while Chael Sonnen (28-13-1, 43% finishing rate) entered as the No.6 (currently the #1 in this weight division is Jon Jones). Evans vs Sonnen is on the undercard of Georges St Pierre vs Johny Hendricks – UFC 167. Watch the video!

(This is a free embeddable highlights video hosted on springboardplatform.com – users:”bjpenn”)