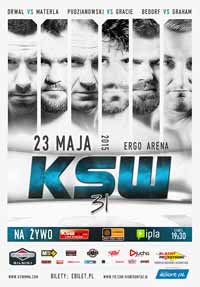 Review by AllTheBestFights.com: 2015-05-23, disappointing and boring fight: Attila Vegh vs Goran Reljic gets one star!

The black belt in karate Attila Vegh entered this fight with a pro mma record of 29-5-2 (72% finishing rate) and he is ranked as the No.17 light heavyweight in the world. He won the Bellator light-Hw belt in 2013, against Christian M’Pumbu (=M’Pumbu vs Vegh), but then he lost it at his first defense with Emanuel Newton (via split decision, Vegh vs Newton 2).
His opponent, the black belt in Brazilian jiu-jitsu Goran Reljic, has a record of 14-4-0 (71% finishing rate) and he entered as the No.38 in the same weight class. He suffered his last loss in 2013, against Jan Blachowicz (=Blachowicz vs Reljic), but after this bout he has won three times beating Tomasz Narkun in his last fight. Vegh vs Reljic is valid for the KSW light heavyweight title; undercard of Michal Materla vs Tomasz Drwal – KSW 31. Watch the video and rate this fight!