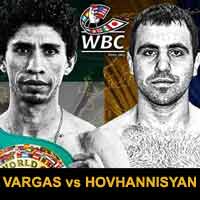 Review by AllTheBestFights.com: 2018-05-12, nice and tough exchanges between Rey Vargas and Azat Hovhannisyan: it gets three stars.

The undefeated Wbc super-Bw champion Rey Vargas entered this fight with a perfect record of 31-0-0 (22 knockouts) and he is ranked as the No.4 super bantamweight in the world (currently the #1 in this division is Luis Nery). He fought three times last year winning over Gavin McDonnell (Vargas vs McDonnell), Ronny Rios (Vargas vs Rios) and Oscar Negrete (Rey Vargas vs Oscar Negrete).
His opponent, Azat Hovhannisyan, has a boxing record of 14-2-0 (11 KOs=79%) and he entered as the No.15 in the same weight class. He suffered his last loss when he faced Walter Santibanes in 2014 but since then he has won eight consecutive bouts defeating Ronny Rios in 2018. Vargas vs Hovhannisyan is valid for the WBC World super bantamweight title (Vargas’ third defense); undercard of Sadam Ali vs Jaime Munguia. Watch the video and rate this fight!