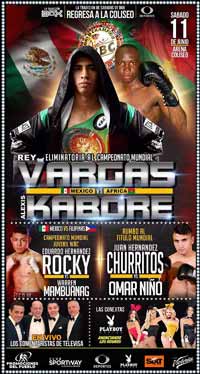 Review by AllTheBestFights.com: 2016-06-11, one sided fight between Rey Vargas and Alexis Kabore: it gets two stars.

The undefeated Rey Vargas entered this fight with a perfect boxing record of 26-0-0 (21 KOs=81%) and he is ranked as the No.17 super bantamweight in the world. He has already fought once in 2016 winning over Christian Esquivel.
His opponent, Alexis Boureima Kabore, has an official record of 25-1-0 (6 knockouts) but he is not ranked as he hasn’t fought since May 1, 2015 when he beat Fatiou Fassinou; he suffered his only loss at his professional boxing debut in 2004. Vargas vs Kabore, WBC super bantamweight title eliminator, is the main event of the evening. Watch the video and rate this fight!