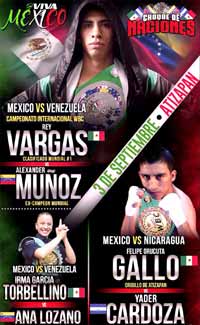 Review by AllTheBestFights.com: 2016-09-03, pretty good fight between Rey Vargas and Alexander Munoz: it gets three stars.

The undefeated Rey Vargas entered this fight with a perfect record of 27-0-0 (21 KOs=78%) and he is ranked as the No.15 super bantamweight in the world while his opponent, the former Wba super-Flw champion Alexander Munoz, has a boxing record of 38-6-0 (30 KOs=79%). Both boxers have already fought in 2016: Vargas has beat Christian Esquivel and Alexis Boureima Kabore (=Vargas vs Kabore) while Munoz has defeated Guillermo Ortiz. Vargas vs Munoz is valid for the vacant WBC International Silver super bantamweight title. Watch the video and rate this fight!