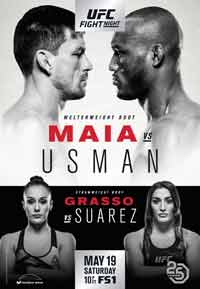 Review by AllTheBestFights.com: 2018-05-19, some good exchanges between Dominick Reyes and Jared Cannonier but it is not enough to get three stars: it gets two.

The undefeated Dominick Reyes entered this fight with a perfect mma record of 8-0-0 (87% finishing rate) and he is ranked as the No.38 light heavyweight in the world. He fought four times last year winning over Marcus Govan, Jordan Powell, Joachim Christensen and Jeremy Kimball.
His opponent, Jared Cannonier, has a record of 10-3-0 (80% finishing rate) and he entered as the No.53 in the same weight class but he lost two out of his last three bouts, against Glover Teixeira (Glover Teixeira vs Jared Cannonier) and Jan Blachowicz; between these two fights he beat
Nick Roehrick. Reyes vs Cannonier is on the undercard of Demian Maia vs Kamaru Usman – UFC Fight Night 129. Watch the video and rate this fight!

(Free embeddable video hosted on Youtube and not uploaded by AllTheBestFights)
https://www.youtube.com/watch?v=gmEVbTqN-Do