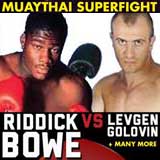 Review: 2013-06-14, fight not particularly exciting between Riddick Bowe and Levgen Golovin: it gets two stars. The undefeated Levgen Golovin ranked as the No.7 heavyweight in the world entered the fight with a record of 9-0-0 while the 44-year-old, former World boxing champion, Riddick Bowe is at his professional muay thai debut (he has a boxing record of 43-1-0, 33 KOs). Bowe vs Golovin is the main event of “Muaythai Super-fight”. Watch the video!