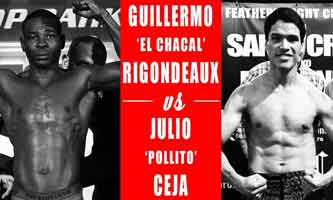 Review by AllTheBestFights.com: 2019-06-23, nice and tough exchanges between Guillermo Rigondeaux and Julio Ceja it gets three stars.

The 2000 and 2004 Olympic bantamweight gold medalist and former Wba super-Bw champion Guillermo Rigondeaux entered this fight with a pro boxing record of 18-1-0 (12 knockouts) and he is ranked as the No.4 super bantamweight in the world (currently the #1 in this division is Emanuel Navarrete). He suffered his only loss when he faced Vasyl Lomachenko in 2017 (Vasyl Lomachenko vs Guillermo Rigondeaux), after this bout he has beat Giovanni Delgado (Guillermo Rigondeaux vs Giovanni Delgado).
His opponent, the former Wbc super-Bw champ Julio Ceja, has a record of 32-3-0 (28 KOs=87%) but he is not ranked as he hasn’t fought since May 26, 2018 when he was defeated by Franklin Manzanilla (Julio Ceja vs Franklin Manzanilla); before this bout, in 2017, he had won over Anselmo Moreno (Anselmo Moreno vs Julio Ceja). Rigondeaux vs Ceja, WBC World super bantamweight title final eliminator, is on the undercard of Jermell Charlo vs Jorge Cota. Watch the video and rate this fight!