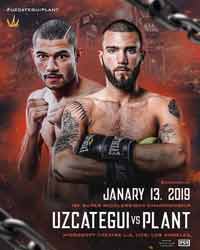 Review by AllTheBestFights.com: 2019-01-13, some good single shots between Guillermo Rigondeaux and Giovanni Delgado but it is not enough to get three stars: it gets two.

The 2000 and 2004 Olympic bantamweight gold medalist and former Wba super-Bw champion Guillermo Rigondeaux entered this fight with a boxing record of 17-1-0 (11 knockouts) but he is not ranked as he hasn’t fought since December 9, 2017 when he was defeated by Vasyl Lomachenko (Vasyl Lomachenko vs Guillermo Rigondeaux); before this bout he had beat Moises Flores (then changed to a no-contest since Flores was knocked out with a punch as the bell rang, Rigondeaux vs Flores).
His opponent, Giovanni Delgado, has an official record of 16-8-0 (9 knockouts) and he entered as the No.307 featherweight in the world but he won just one out of his last five bouts, against Cesar Juarez in 2016. Rigondeaux vs Delgado is on the undercard of Jose Uzcategui vs Caleb Plant. Watch the video and rate this fight!