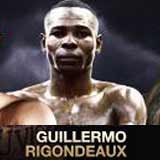 Review: 2014-07-19, disappointing and controversial fight between Guillermo Rigondeaux and Sod Kokietgym: it gets two stars. The undefeated 2000 and 2004 Olympic bantamweight gold medalist Guillermo Rigondeaux entered this fight with a perfect record of 13-0-0 (8 knockouts) and he is ranked as the No.1 super bantamweight in the world, he fought twice last year defeating Nonito Donaire (=Donaire vs Rigondeaux and Joseph Agbeko (=Rigondeaux vs Agbeko).
His opponent, Sod Kokietgym, has an official record of 63-2-1 (28 knockouts) and he entered as the No.63 in the same weight class, he suffered his last defeat in 2006 when he faced Daniel Ponce De Leon in their rematch (The Mexican had already won the first fight in 2005), since then he has collected 36 wins and one draw (against Jack Asis in 2009). Rigondeaux vs Kokietgym is valid for the WBA and WBO super bantamweight titles (both belts held by Rigondeaux); undercard of Zou Shiming vs Luis De la Rosa. Watch the video and rate this fight!