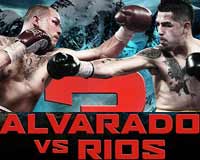 Review by AllTheBestFights.com: 2015-01-24, exciting fight (close to get four stars) but too one-sided: Mike Alvarado vs Brandon Rios 3 gets three stars.

The former Wbo light-Ww champion Mike Alvarado entered this fight with a professional boxing record of 34-3-0 (23 knockouts) and he is ranked as the No.20 welterweight in the world, all his three defeats occurred in his last four fights: he lost the first bout against Rios (2012 Fight of the Year candidate, Rios vs Alvarado I), then he won the rematch (4-stars-fight, Rios vs Alvarado II) and he lost again to Ruslan Provodnikov (4-stars-fight Alvarado vs Provodnikov) and to Juan Manuel Marquez (=Marquez vs Alvarado).
His opponent, the former Wba Lw champion Brandon Rios, has an official record of 32-2-1 (23 knockouts) and he entered as the No.16 in the same weight class, he suffered two consecutive defeats in 2013: the rematch against Alvarado as we said earlier and then he lost to Manny Pacquiao (=Pacquiao vs Rios); after this bout he came back to win beating Diego Gabriel Chaves (by disqualification Rios vs Chaves). Alvarado vs Rios 3 is valid for the vacant WBO International welterweight title. Watch the video and rate this fight!