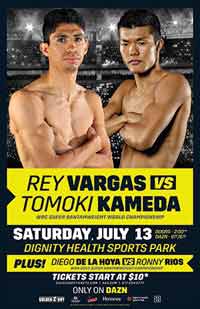 Review by AllTheBestFights.com: 019-07-13, pretty good finish between Diego De La Hoya and Ronny Rios but it is not enough to get three stars: it gets two.

The undefeated cousin of Oscar De La Hoya, Diego De La Hoya, entered this fight with a perfect record of 21-0-0 (10 knockouts) and he is ranked as the No.12 super bantamweight in the world. In his last three bouts he has won over Randy Caballero (Diego De La Hoya vs Randy Caballero) and Jose Salgado (Diego De La Hoya vs Jose Salgado) but his last one, against Enrique Bernache, ended in a no-contest (Diego De La Hoya vs Enrique Bernache).
His opponent, Ronny Rios, has an official boxing record of 30-3-0 (14 knockouts) and he entered as the No.30 featherweight. He was defeated by Azat Hovhannisyan last year but he came back to win against Daniel Olea in 2019. De La Hoya vs Rios is valid for the NABF super bantamweight title; undercard of Rey Vargas vs Tomoki Kameda. Watch the video and rate this fight!