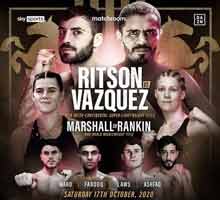 Review by AllTheBestFights.com: 2020-10-17, disappointing fight between Lewis Ritson and Miguel Vazquez: it gets two stars.
Lewis Ritson entered this fight with a pro boxing record of 20-1-0 (12 knockouts) and he is ranked as the No.16 super lightweight in the world. He suffered his only loss when he faced Francesco Patera in 2018 (four-stars fight, Lewis Ritson vs Francesco Patera), after this bout he has won over German Argentino Benitez, Marek Jedrzejewski and Robbie Davies Jnr (Robbie Davies Jnr vs Lewis Ritson).
His opponent, the former Ibf Lw champ Miguel Vazquez, has a record of 42-9-0 (16 knockouts) and he entered as the No.76 in the same weight class. He lost two consecutive bouts last year, against Ohara Davies (Ohara Davies vs Miguel Vazquez) and Batyrzhan Jukembayev but then he has beat Jesus Miguel Velasco. Vazquez vs Ritson is valid for the vacant WBA Inter-Continental super-lightweight title. Watch the video and rate this fight!