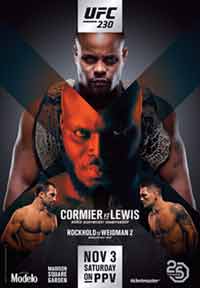 Review by AllTheBestFights.com: 2018-11-03, disappointing fight between Jack Marshman and Karl Roberson: it gets two stars.

Jack Marshman entered this fight with a professional record of 22-7-0 (82% finishing rate) and he is ranked as the No.56 middleweight in the world. He fought three times last year losing twice, against Thiago Santos (Thiago Santos vs Jack Marshman) and Antonio Carlos Jr, but between these two bouts he beat Ryan Janes.
His opponent, Karl Roberson, has a mma record of 6-1-0 (83% finishing rate) and he entered as the No.106 in the same weight class but he comes off his first loss, suffered against Cezar Ferreira in May; before this bout, in 2017, he had beat Darren Stewart. Marshman vs Roberson is on the undercard of Daniel Cormier vs Derrick Lewis – UFC 230. Watch the video and rate this fight!

(Free embeddable video hosted on Youtube and not uploaded by AllTheBestFights)
https://www.youtube.com/watch?v=W_lK0CcyuZc