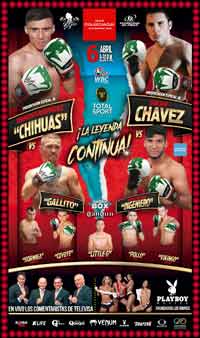 Review by AllTheBestFights.com: 2019-04-06, nice and tough fight between Francisco Rodriguez Jr and Oswaldo Novoa: it gets three stars.

The former Wbo and Ibf minimumweight champion Francisco Rodriguez Jr entered this fight with a professional record of 29-4-1 (21 knockouts) and he is ranked as the No.14 super flyweight in the world. ‘Chihuas’ Rodriguez lost to Moises Fuentes in 2015 (Rodriguez vs Fuentes) but since then he has won ten consecutive bouts beating Yohei Tobe (Francisco Rodriguez Jr vs Yohei Tobe) and Hernan Marquez in his last two (Francisco Rodriguez Jr vs Hernan Marquez).
His opponent, the former Wbc champ Oswaldo Novoa, has a boxing record of 14-8-4 (9 knockouts) and he entered as the No.51 in the same weight class but his last victory occurred in 2014 when he faced Alcides Martinez (Oswaldo Novoa vs Alcides Martinez); since then he has collected four defeats and three draws. Rodriguez vs Novoa is valid for the WBC Latino Silver super flyweight title. Watch the video and rate this fight!