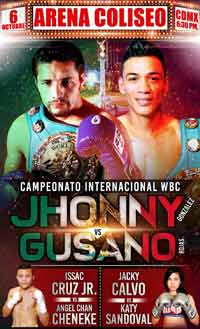 Review by AllTheBestFights.com: 2018-10-06, pretty good fight between Jhonny Gonzalez and Tomas Rojas: it gets three stars.

The former world champion in two different weight classes Jhonny Gonzalez entered this fight with a record of 66-10-0 (54 KOs=82%) and he is ranked as the No.16 super featherweight in the world. He suffered his last loss when he faced Jonathan Oquendo in 2015 (Gonzalez vs Oquendo), since then he has won eight consecutive bouts beating Jessie Cris Rosales (Gonzalez vs Rosales), Irving Berry (Jhonny Gonzalez vs Irving Berry) and Marlyn Cabrera in his last three (Jhonny Gonzalez vs Marlyn Cabrera).
His opponent, the former Wbc super-Flw champion Tomas Rojas, has a boxing record of 49-16-1 (33 knockouts) and he entered as the No.72 in the same weight class but ‘Gusano’ Rojas lost two out of his last three bouts, against Cristian Mijares (Mijares vs Rojas 2) and Edivaldo Ortega (Edivaldo Ortega vs Tomas Rojas); between these two fights he beat Jose Cifuentes. Gonzalez vs Rojas is valid for the WBC Latino super featherweight title. Watch the video and rate this fight!