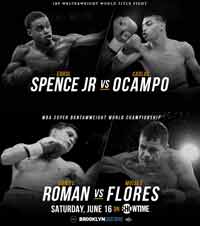 Review by AllTheBestFights.com: 2018-06-16, nice and tough exchanges between Daniel Roman and Moises Flores: it gets three stars.

The Wba super-Bw champion Daniel Roman entered this fight with a pro record of 24-2-1 (9 knockouts) and he is ranked as the No.5 super bantamweight in the world (currently the #1 in this division is Luis Nery). He suffered his last loss when he faced Juan Reyes in 2013, since then he has won 16 consecutive fights beating Adam Lopez (Roman vs Lopez), Shun Kubo (Shun Kubo vs Daniel Roman) and Ryo Matsumoto in his last three (Daniel Roman vs Ryo Matsumoto).
His opponent, the undefeated former Ibo and interim Wba super-Bw champ Moises Flores, has a perfect boxing record of 25-0-0 (17 knockouts) and he entered as the No.27 in the same weight class. He fought just once in 2017 losing to Guillermo Rigondeaux (but then the result was changed in a no-contest since Flores was knocked out with a punch as the bell rang, Guillermo Rigondeaux vs Moises Flores); before this bout, he had beat Paulus Ambunda in 2016 and Luis Emanuel Cusolito in 2015 (Flores vs Cusolito). Roman vs Flores is valid for the WBA World super bantamweight title (Roman’s second defense); undercard of Errol Spence Jr vs Carlos Ocampo. Watch the video and rate this fight!