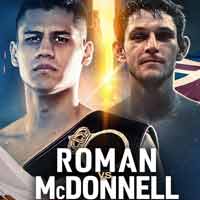 Review by AllTheBestFights.com: 2018-10-06, great fight between Daniel Roman and Gavin McDonnell: it gets three stars.

The Wba super-Bw champion Daniel Roman entered this fight with a professional record of 25-2-1 (9 knockouts) and he is ranked as the No.5 super bantamweight in the world (currently the #1 in this division is Luis Nery). He suffered his last loss when he faced Juan Reyes in 2013, since then he has won 17 consecutive fights beating Shun Kubo (Shun Kubo vs Daniel Roman), Ryo Matsumoto (Daniel Roman vs Ryo Matsumoto) and Moises Flores in his last three (Daniel Roman vs Moises Flores).
His opponent, Gavin McDonnell, has a boxing record of 20-1-2 (5 knockouts) and he entered as the No.13 in the same weight class. He suffered his only loss when he faced Rey Vargas last year (Rey Vargas vs Gavin McDonnell), after this bout he has won over Simas Volosinas, Jozsef Ajtai, Gamal Yafai (Gamal Yafai vs Gavin McDonnell) and Stuart Hall (Gavin McDonnell vs Stuart Hall). Roman vs McDonnell is valid for the WBA World super-Bw title; undercard of Jessie Vargas vs Thomas Dulorme. Watch the video and rate this fight!

(Free embeddable video hosted on Youtube and not uploaded by AllTheBestFights)
https://www.youtube.com/watch?v=f6iNVni7tuw