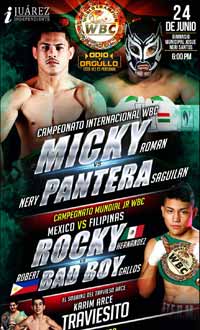 Miguel Roman entered this fight with a professional record of 56-12-0 (43 KOs=77%) and he is ranked as the No.12 super featherweight in the world while his opponent, Nery Saguilan, has an official boxing record of 38-8-1 (13 knockouts). Both boxers have fought and lost once in 2017: Roman was defeated by Takashi Miura (4-stars fight, Roman vs Miura) while ‘Pantera’ Saguilan lost to Luis Jesus Vidales. Mickey Roman vs Nery Saguilan is the main event of the evening. Watch the video and rate this fight!