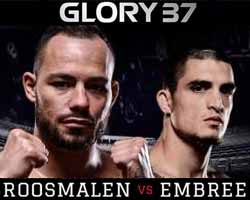 Review by AllTheBestFights.com: 2017-01-20, good fight between Robin van Roosmalen and Matt Embree: it gets three stars.

The former Glory Lw and current Glory Fw champion Robin van Roosmalen entered this fight with a professional record of 47-16-3 (12 knockouts) and he is ranked as the No.5 welterweight in the world. He fought twice last year losing to Sitthichai Sitsongpeenong (=Roosmalen vs Sitthichai 2) and winning over Gabriel Varga (=Varga vs Roosmalen).
His opponent, Matt Embree, has an official record of 39-7-0 (18 knockouts) and he entered as the No.9 in the same weight class. He lost to Petboonchu Baoplaboonchoo in 2015 but he came back to win in 2016 against Chi-Bin Lim and Giga Chikadze. Robin van Roosmalen vs Matt Embree was originally scheduled as a Glory featherweight bout but Robin weighed in eight pounds over the limit of 145 lbs, so the Glory featherweight title is only at stake for Embree; undercard of Jason Wilnis vs Israel Adesanya – Glory 37. Watch the video and rate this fight!

Where: The Novo by Microsoft, Los Angeles, California, USA