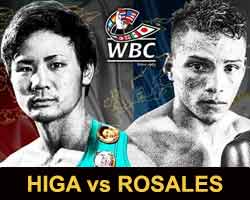 Review by AllTheBestFights.com: 2018-04-15, good exchanges in the second part of the fight: Daigo Higa vs Cristofer Rosales gets three stars.

The undefeated Wbc Flw champion Daigo Higa entered this fight with a perfect record of 15-0-0 (15 KOs=100%) and he is ranked as the No.2 flyweight in the world (currently the #1 in this division is Donnie Nietes). In his last three fights he has beat Juan Hernandez Navarrete (Navarrete vs Higa), Thomas Masson (Higa vs Masson) and Moises Fuentes (Daigo Higa vs Moises Fuentes).
His opponent, Cristofer Rosales, has a boxing record of 26-3-0 (17 knockouts) and he entered as the No.9 in the same weight class. He lost to Andrew Selby last year (Selby vs Rosales) but then he has defeated Martin Tecuapetla, Mohammed Obbadi and Alexander Taylor. Higa vs Rosales is valid for the WBC World flyweight title (Higa’s third defense); undercard of Ryota Murata vs Emanuele Blandamura. Watch the video and rate this fight!