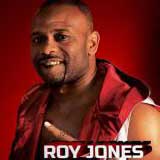 Review: 2013-12-21, some good combinations of punches but the fight between Roy Jones Jr and Zine Eddine Benmakhlouf was not so exciting: it gets two stars. Roy Jones Jr entered the fight with a record of 56-8-0 (40 knockouts) while Zine Eddine Benmakhlouf had a record of 17-3-1 (8 knockouts); they are not ranked as they haven’t fought for more than one year. Jones Jr vs Benmakhlouf is valid for the vacant WBU (German Version) cruiserweight title. Watch the video!

Where: Dynamo Palace of Sports in Krylatskoye, Moscow, Russia