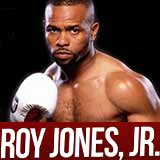 Review by AllTheBestFights.com: 2015-03-06, some good exchanges between Roy Jones Jr and Willie Williams but it is not enough to get three stars: it gets two.

The 46-year-old and former world champion in four different weight classes Roy Jones Jr entered this fight with a boxing record of 59-8-0 (42 knockouts) and he is ranked as the No.25 cruiserweight in the world while his opponent, Willie Williams (ten years younger than Jones), has a record of 14-8-2 (4 knockouts). Roy Jones suffered his last defeat in 2011 when he faced Denis Lebedev (=Lebedev vs Jones Jr), since then he has won five consecutive bouts but his best opponent was Pawel Glazewski in 2012 (=Jones Jr vs Glazewski). Jones Jr vs Williams is the main event of the evening. Watch the video and rate this fight!