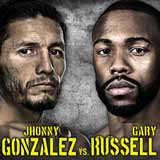 Jhonny Gonzalez entered this fight with a professional boxing record of 57-8-0 (48 KOs=84%) and he is ranked as the No.2 featherweight in the world (currently the #1 in this division is Nicholas Walters); he suffered his last defeat in 2012 when he faced Daniel Ponce De Leon (=Gonzalez vs Ponce De Leon). Since then he has collected five consecutive victories winning the Wbc belt against Abner Mares in 2013 (=Mares vs Gonzalez) and successfully defending it with Clive Atwell (=Gonzalez vs Atwell) and Jorge Arce (=Gonzalez vs Arce).
His opponent, Gary Russell Jr, has an official record of 25-1-0 (14 knockouts) and he entered as the No.21 in the same weight class; he suffered his only defeat last year, against Vasyl Lomachenko (bout valid for the Wbo Fw title, Lomachenko vs Russell Jr). After losing he came back to win beating Christopher Martin. Gonzalez vs Russell Jr is valid for the WBC World featherweight title (Gonzalez’s third defense). Watch the video and rate this fight!