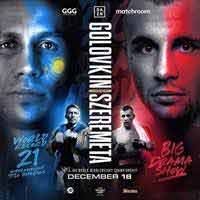 Review by AllTheBestFights.com: 2020-12-18, disappointing fight between John Ryder and Mike Guy: it gets two stars (take a look at our ranking of the best boxing fights of 2020).
The former interim Wba super-Mw champion John Ryder entered this fight with a record of 28-5-0 (16 knockouts) and he is ranked as the No.6 super middleweight in the world but he comes off the loss against current #1 Callum Smith (Callum Smith vs John Ryder); before this bout, in May 2019, he had beat Bilal Akkawy (John Ryder vs Bilal Akkawy).
His opponent, Mike Guy, has a boxing record of 12-5-1 (5 knockouts) and he entered as the No.39 in the same weight class but he also lost his last bout, against Demond Nicholson; in his previous two fights he had defeated Denis Douglin and Eric Moon. Guy vs Ryder is on the undercard of Gennady Golovkin vs Kamil Szeremeta. Watch the video and rate this fight!