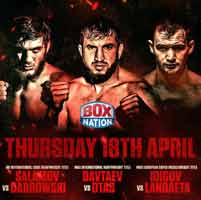 Review by AllTheBestFights.com: 2019-04-18, pretty good finish between Umar Salamov and Norbert Dabrowski but the rest of the fight was quite boring: it gets two stars.

The former Ibo light-Hw champion Umar Salamov entered this fight with a professional boxing record of 23-1-0 (17 knockouts) and he is ranked as the No.19 light heavyweight in the world. He lost to Damien Hooper in 2017 but then he has won four bouts beating Denis Liebau (Umar Salamov vs Denis Liebau) and Emmanuel Anim in his last two.
His opponent, Norbert Dabrowski, has an official record of 22-7-2 (9 knockouts) and he entered as the No.39 in the same weight class. He was defeated by Robert Talarek in 2017, but then he has beat Oleksandr Haraschenko, tied with Jordan Kulinski and taken revenge on Talarek. Salamov vs Dabrowski is valid for the WBO International light heavyweight title. Watch the video and rate this fight!