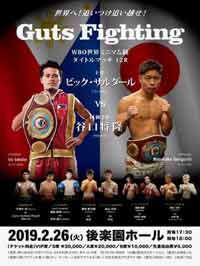 Review by AllTheBestFights.com: 2019-02-26, fight not so exciting between Vic Saludar and Masataka Taniguchi: it gets two stars.

The Wbo champion Vic Saludar entered this fight with a pro boxing record of 18-3-0 (10 knockouts) and he is ranked as the No.4 minimumweight in the world (currently the #1 in this division is Knockout CP Freshmart). He was defeated by Toto Landero in 2017 (via split decision) but then he has won four bouts beating Mike Kinaadman and Ryuya Yamanaka in 2018 (Ryuya Yamanaka vs Vic Saludar).
His opponent, Masataka Taniguchi, has a record of 11-2-0 (7 knockouts) and he entered as the No.13 in the same weight class. He lost to Tsubasa Koura in 2017 but then he has won over Patiphan Prajuabsook, Reymark Taday and Joel Lino. Saludar vs Taniguchi is valid for the WBO World minimumweight title (Saludar’s first defense). Watch the video and rate this fight!