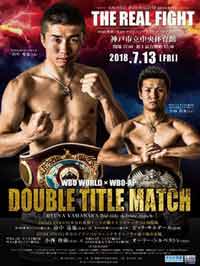 Review by AllTheBestFights.com: 2018-07-13, pretty good fight between Ryuya Yamanaka and Vic Saludar: it gets three stars.

The Wbo champion Ryuya Yamanaka entered this fight with a professional boxing record of 16-2-0 (5 knockouts) and he is ranked as the No.5 minimumweight in the world (currently the #1 in this division is Wanheng Menayothin). He lost to Roque Lauro in 2014 but then he has won nine consecutive bouts beating Khanongmek Sithkrukong, Tatsuya Fukuhara (Tatsuya Fukuhara vs Ryuya Yamanaka) and Moises Calleros in his last three (Ryuya Yamanaka vs Moises Calleros).
His opponent, Vic Saludar, has an official record of 17-3-0 (10 knockouts) and he entered as the No.13 in the same weight class. He was defeated by Toto Landero last year (via split decision) but then he has won over Mike Kinaadman, Lito Dante and Kinaadman again. Yamanaka vs Saludar is valid for the WBO World minimumweight title (Yamanaka’s second defense). Watch the video and rate this fight!

(Free embeddable video hosted on Youtube and not uploaded by AllTheBestFights)
https://www.youtube.com/watch?v=p2CUt7tTyWM