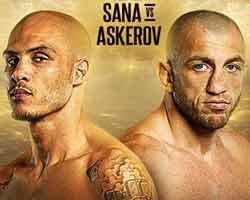 Review by AllTheBestFights.com: 2019-08-16, pretty good fight between Samy Sana and Dzhabar Askerov: it gets three stars.

The former Wbc and Iska world champion Samy Sana entered this fight with a professional kickboxing record of 134-9-1 (49 knockouts) and he is ranked as the No.6 middleweight in the world. He has already fought twice in 2019 losing to Jo Nattawut in February and beating Yodsanklai Fairtex in May (Yodsanklai Fairtex vs Samy Sana 2).
His opponent, Dzhabar Askerov, has an official record of 108-35-2 (54 knockouts) and he entered as the No.10 super welterweight. He was defeated by Diego Freitas last year but he came back to win in 2019 against Enriko Kehl (Dzhabar Askerov vs Enriko Kehl 3). Sana vs Askerov is the semi-final of the ONE Kickboxing featherweight Grand-Prix tournament and it is on the undercard of Petchdam Petchyindee Academy vs Ilias Ennahachi – ONE FC 99. Watch the video and rate this fight!

Event: One Championship 99: Dreams of Gold