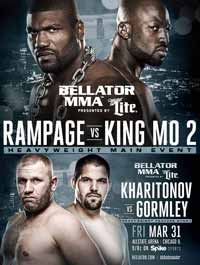 Review by AllTheBestFights.com: 2017-03-31, fight not particularly exciting between Marcos Galvao and Emmanuel Sanchez: it gets two stars.

Emmanuel Sanchez entered this fight with a mma record of 14-3-0 (43% finishing rate) and he is ranked as the No.21 featherweight in the world. He lost to Daniel Weichel last year (=Weichel vs Sanchez) but he came back to win in 2017 against Georgi Karakhanyan (=Karakhanyan vs Sanchez).
His opponent, the black belt in Brazilian jiu-jitsu and former Bellator Bw champion Marcos Galvao, has an official record of 18-7-1 (28% finishing rate) and he entered as the No.28 bantamweight. ‘Loro’ Galvao fought twice last year losing to Eduardo Dantas (=Galvao vs Dantas 2) and winning over LC Davis (=Galvao vs Davis). Emmanuel Sanchez vs Marcos Galvao is on the undercard of Quinton Rampage Jackson vs Muhammed King Mo Lawal 2 – Bellator 175. Watch the video and rate this fight!