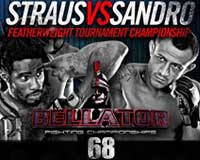 Review: 2012-05-11, good fight between Marlon Sandro and Daniel Straus: three stars (fight ended by unanimous decision). Marlon Sandro (22-3-0) entered as the No.14 featherweight in the world while Daniel Straus (19-4-0) entered as the No.13. Straus vs Sandro is the final of the Bellator Featherweight Tournament; main event of Bellator 68. Watch the video!