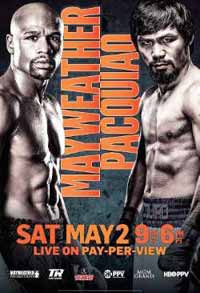 Review by AllTheBestFights.com: 2015-05-02, good pace and nice exchanges between Leo Santa Cruz and Jose Cayetano: it gets three stars.

The undefeated Leo Santa Cruz entered this fight with a pro boxing record of 29-0-1 (17 knockouts) and he is ranked as the No.3 super bantamweight in the world (currently the #1 in this division is Carl Frampton). He won the WBC World super bantamweight title in 2013, against Victor Terrazas (=Terrazas vs Santa Cruz), and he successfully defended it four times (beating Jesus Ruiz in his last bout, Santa Cruz vs Ruiz) but in this bout with Cayetano his belt is not on the line.
His opponent, Jose Cayetano, has an official record of 17-3-0 (8 knockouts) and he entered as the No.109 in the same weight class; he has already fought once in 2015 but he has lost to Enrique Bernache. Santa Cruz vs Cayetano is on the undercard of Floyd Mayweather Jr vs Manny Pacquiao. Watch the video and rate this fight!