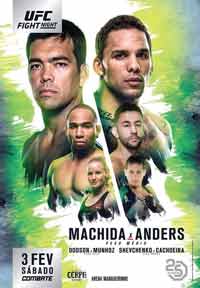 Review by AllTheBestFights.com: 2018-02-03, nice and tough fight between Thiago Santos and Anthony Smith: it gets three stars (UFC Fight of the Night).

Thiago Santos entered this fight with a record of 16-5-0 (75% finishing rate) and he is ranked as the No.20 middleweight in the world. Thiago ‘Marreta’ lost twice in 2016, against Gegard Mousasi (=Mousasi vs Santos ) and Eric Spicely, but then he has won over Jack Marshman (=Santos vs Marshman), Gerald Meerschaert and Jack Hermansson (=Santos vs Hermansson).
His opponent, Anthony Smith, has a mma record of 28-12-0 (89% finishing rate) and he entered as the No.28 in the same weight class. He also lost in 2016, against Cezar Ferreira, but then he has beat Elvis Mutapcic, Andrew Sanchez and Hector Lombard (=Lombard vs Smith). Santos vs Smith is on the undercard of Lyoto Machida vs Eryk Anders – UFC Fight Night 125. Watch the video and rate this fight!