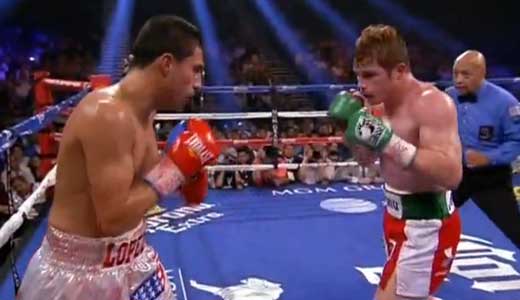 Review: 2012-09-15, tough and spectacular fight with three knockdowns and some great exchanges: Saul “Canelo” Alvarez vs Josesito Lopez is one of the best boxing fights of 2012, four stars. The undefeated Saul Alvarez (40-0-1) entered as the No.2 light middleweight in the world while Josesito Lopez (30-4-0) entered as the No.8. Saul Alvarez vs Lopez is valid for the WBC light middleweight title (Alvarez’s fifth defense) . Watch the video!

Alternative video (hosted on Youku and it was not uploaded by AllTheBestFights, to report it please visit this link where the video is hosted)