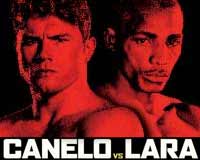 Review: 2014-07-12, two very different style of boxing and two of the best boxers in the world do not always produce a good fight: Saul Alvarez vs Erislandy Lara gets two stars. Saul ‘Canelo’ Alvarez entered this fight with a professional Boxing record of 43-1-1 (31 knockouts) and he is ranked as the No.1 light middleweight in the world, he is just 23 years old (8 years younger than Lara) and last year he suffered his only loss when he faced the undefeated Floyd Mayweather Jr in a fight valid for the WBC and WBA light-Mw belts (=Mayweather vs Alvarez). ‘Canelo’ came back to victory in 2014 beating Alfredo Angulo (=Alvarez vs Angulo).
His opponent, Erislandy Lara, has an official record of 19-1-2 (12 knockouts) and he entered as the No.2 in the same weight class, he suffered his only defeat in 2011 when he faced Paul Williams (via majority decision Williams vs Lara), since then he has collected four victories and one draw, against Vanes Martirosyan (=Martirosyan vs Lara). Canelo vs Lara is the main event of the evening. Watch the video and rate this fight!